On a rainy and cold evening at Eidomeni, it was decided that we would bring trays of tea to the tents instead of making people wait in line in the rain. The camp is not well equipped for days like this. Especially for the people who are using small camping tents and even more horrible for the ones who have been sleeping outside since the new border allowance rules. Flooding is a problem, distribution of food, water, everything is disrupted, and then, of course, the mud can make it dangerous for those just arriving in buses who are carrying bags, children, and trying to find a place to sleep.

But we were successful in providing 1000s+ cups of tea, even with volunteers making long walks to the railroad tracks where many refugees have been living for over a week now.

One man who had been huddling under our tent for a while was quietly on his cell phone. He caught my attention and motioned me over. With hand signals and two English words he communicated that he needed help finding Eidomeni on the map and sending the drop pin of where we were to his friend (maybe brother) in Milan. I also learned that his daughter was in Milan.   Slow internet and my lack of knowledge of smart phones other than iPhones took me a while to get the link, but we did it! A little while later he gave me the beads in the picture. I said, “Oh no, no problem, shukraan! Take them for your daughter!” But he insisted as I got teary eyed and said many more shukraans. 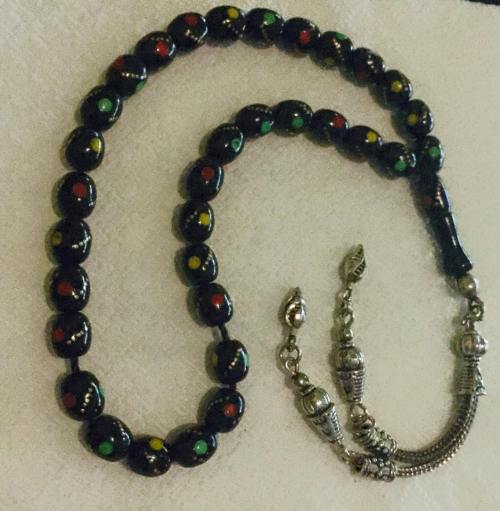