Before I left Italy, I wrote this list.  I pretty much did what I always do when traveling to a new place; study a map of the country or countries I am visiting and write down names that sound interesting.

Besides Split and Sarajevo, everything else has changed.  The “Mark” in this note is Mark Orfila, my pedicab coworker and wonderful friend.  When I finally got into contact with him, he went on a full blown out quest to get me in touch with all of his connections from his 10+ years he lived in the Balkans.  From tomorrow and until I get to Corfu, I have been given an itinerary from Mark, who I KNOW has spent countless hours online and Skyping with his friends in Kosovo and Albania to arrange for me to be taken care of.

One assumption I am feeling confident to make (although you know I do not encourage making assumptions!) is that I will most CERTAINLY be taken care of.  Mark, thank you.

It has been a very long time since I have been able to write here.  There is a lot to catch up on and many other ‘thank yous’ to be made but right now I want to write about Bosnia and Herzegovina.

Again, the world has proved itself to be a majority of amazing, kind, and friendly people.  In Split I met Jeff.  A traveller from Denver, CO who decided to join me in going to Bosnia.

We took a bus to Mostar.  My process of deciding this place was the same.  I looked at the map and said to myself, “What’s on the way to Sarajevo?  Mostar?  Sounds good.” 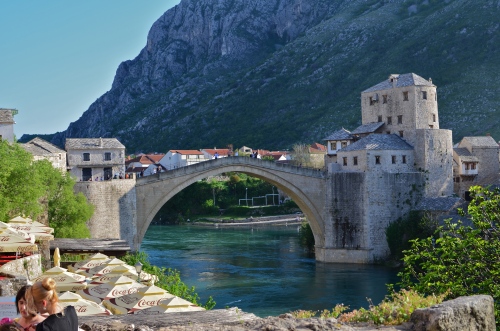 Mostar is a beautiful place with some of the most hospitable people.  The “recent war” as the locals call it, is an immortal story that can be told by anyone no matter their age.  Our amazing host, Deni, told us to visit the old and abandoned bank that was used at a sniper tower in the war.  The building is completely open to the public.  Even though it looks like it is being prepared for a demolition crew, there are no fences or security and can be explored at one’s free will.

Jeff and I spent over an hour walking around each floor, discovering empty bullet shells, graffiti, broken bottles, and other debris.  It is twenty years later and the money to even tear down the building is nonexistent.  If Deni had not told us about this place, that we were allowed to go inside, I do not believe we ever would have gone anywhere near it. 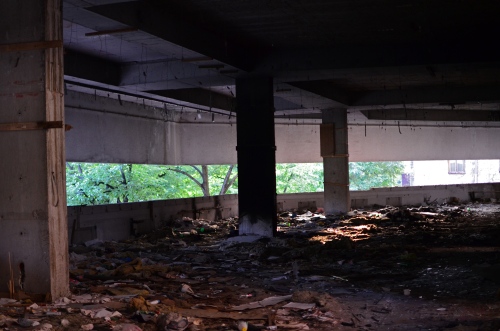 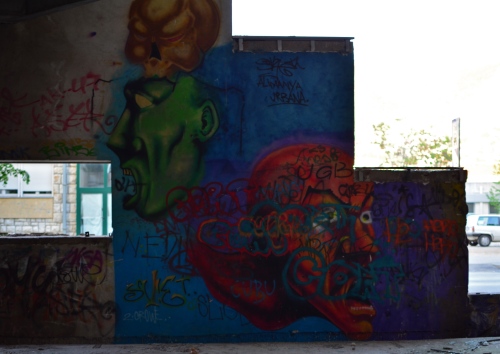 When we made it to the top of the building the sun was beginning to set.  The experience made us both reserved and somewhat anxious.  My best description is that the event made me feel human.  After all the desensitizing violence portrayed visually everyday, I stood on that roof and felt my blood turn cold.

I made a 360 and looked out at the beautiful town nestled between the hills.  It felt like we were in the only place in the world.  A fish bowl.  The call to prayer began and I closed my eyes and took the reminder as a moment to meditate.  Soon after, church bells began to ring.  I thought about the proximity of those religious homes and how at one time, everyone lived in peace.

Of course I thought about People of the Book by Geraldine Brooks.  How amazing and grateful I am to have read that recently and have the chance to visit this country that has a large part in the story.

The train ride to Sarajevo was stunning.  We passed by rivers, lakes and cascading hills.  I kept seeing the girl from WWII in People of the Book who runs away into the hills outside Sarajevo.  I kept thinking how impossible it was to really hide anywhere.  And the invasion of the Nazis was not the only time one would want to escape that city.

I felt so ignorant in Sarajevo.  I remember when the Bosnian War ended and Ms. Sutton, my Middle School teacher, brought the film Welcome to Sarajevo to class.  It was a fairly intense movie to see at 12/13 years old.

Jeff and I took a free walking tour with the amazing Neno.  There is so much history here.  I was utterly grateful to have Neno who obviously loved sharing the history of Sarajevo with visitors.  He seriously knew EVERYTHING.  So much more, I’ll repeat it, SO MUCH MORE has happened in Sarajevo!  It truly was the Jerusalem of Europe.  SO MUCH HISTORY!

Neno was close to 7 when the Bosnian War started and remembers attending school in the basement, being hungry, and the admiration for his incredible mother.  Neno’s mother would walk across the besieged city everyday to go to work.  The heart wrenching stories kept coming. 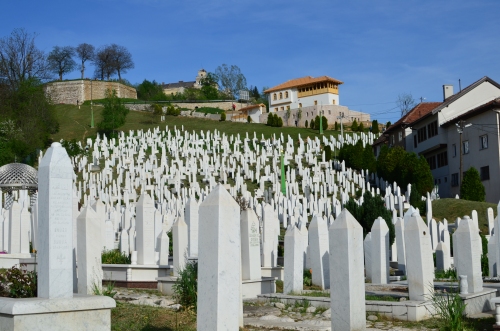 Neno took us to a memorial fountain that was built in the remembrance of the children killed in the war.  There was no physical information about what the fountain represented.  Without Neno, I never would have known what it stood for.

There are two formations in the center of the fountain.  One piece represents the child and the larger one the mother.  The way the statue is in place, makes you see how these pieces interact.  The mother figure is protecting and shielding the child.  There are no human features in these forms but looking at the memorial, one can feel it.

I am not sure why this particular statue was so powerful to me.  Maybe it was from spending time with Karim’s young nieces in Morocco, maybe it was seeing the kids at Peacock Pavilions, maybe it was the horrific event a few months ago in Connecticut, I really don’t know.  But this fountain and the story behind it has hit me so hard.

The base beneath the structure is made from all the collected mortar shells from the tanks that FACT: hit Sarajevo on average 300 times per day for the duration of the war.  Imprinted on the brass base are children’s footprints.  This sent me over the edge and it took several deep breaths to get leveled again.  Processing it now by writing it here I still get shivers.

So, I am overwhelmed.  I still barely have time to fully process this entire experience.  I won’t really be able to for the next week or so.  I am blown away from how much I learned in Sarajevo.  I am grateful for the people I met who were able to discuss similar feelings and hash out historical details.

I went back this morning to take pictures of the fountain.  It is still heavy on my mind.

There is so much to catch up on and so many people to thank and so many incredible pictures but I am going to let this sit.

Filed under The Balkans